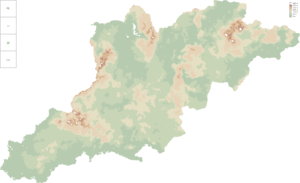 Zokesia's economy is built on its bountiful farmland. From Ezermont to Zok large swaths of countryside make Zokesia the breadbasket of Old Kolus. The cities are often the hub of cultural and commercial trade, with paved 2-lane highways stretching north to south connecting the large areas of Zokesia.

Farming is primarily carried out by small communities or local families, operating modern technology which allows them to utilize large swaths of farmland. Food is sold to the commercial farmer's unions, which ship it along the highways to the cities for processing and distribution. the size of the farms usually mean small townships are formed away from the cities where groups of families live and commune to come together as a community, off the highways. Manufacturing and service industry dominate the northern cities. Designed to process exports south, these cities take raw materials and either ship them out or  turn them into parts, equipment, or exports. Here in the north coal, iron, and steel industries boom and the Oil reserves of Zokesia are located, allowing the factories to continue pumping out material for the people of Zokesia. It is here that Military Industry, and the bulk of the raw materials needed for the arms manufacture, is located.

To the east, Juno houses the high tech development centers of military companies such as Ward Industries, Zokesia Skunkworks, and Extramus Military Techology. The deserts to the east are weapons test ranges and training centers.

New Arcovy in the south is a rolling bountiful plains of grassland, farmland, and hills. The southern cities are removed from the industrious north, and instead house a thriving service industry and medium-size industry. Fine art and trade professions ship goods out to the north and export out of the country. Trade from the northern cities flows through Zok and Esia to reach ports in the south, in both New Arcovy and Valeria, as well as the millions of Zokesians living in the Federal States. Zok and Esia's arts and goods travel far and wide as a result, and fetch high price outside Zokesia's borders.

The crater region of Cythia has seen multiple failed governments spring up, until Zokesian homesteaders took root and began civilizing the land. Now thanks to the crater road, the area is well off, fishing and mining to produce a living wage for the people who live along the slopes of the Crater. Cythia is a sub-state of New Arcovy.

The Bravis Islands are the largest of the Overseas territories, the island group is just 25 Kilometers off of the coast of the Republic of Union. Fishing, herding, and small industry is what dominates the islands. There are two bases on the islands which maintain a static defense force of Federation units.

Dolren is an urban island given to Zokesia by Venmous following the civil war in that nation, ensuring the security of the thousands of Zokesians who live there.

Bayconn Island is the home of the Mariners, the people who lived on Fish Island before the Fish War came and destroyed their home and livelihood. They were emigrated by the NMC and allowed to live on Bayconn until the island was transferred to Zokesia in 2083.

The Federal States of Zokesia are located south of the Zokesian border, and include Royal Kothen, Schrshnell, Juno, Cythia, the Bravis Islands, and Dolren City. These nations pledge economic and political support to Zokesia and answer directly to the Federal government. As long as the Republic of Zokesia acts lawfully and in accordance with the people the states are required to follow Zokesia's laws and edicts. The leaders of these states are hand picked and are loyal to the President. Elections are every 5 years with the President being decided by the winning party or parties should a coalition be required for majority.

The relationship of Puge-Tatar to Zokesia is unique in that they pay for the upkeep and production of Zokesian military units, in exchange for Zokesian protection and free trade. The nation has been sovereign since 2062, following their gaining of independence in the First Vanadian War against Sanctum.

The Kolus Union State, once a great nation spanning the deserts, crumbled in the late 2070s as Saguaro Rebels streamed southward into Vanadian territory. With the heart of the already overstretched Kolus Empire falling apart, many key members of the KUS government have elected to withdraw to break off as forces moved in on the vulnerable capital.The rapidly retreating forces in north Kolus left a power vacumn as the settled in the mountains east of Juno, where the Ordo Junii assisted them with rebuilding and defending their lands from the tribals. As the nation stabilized it began seeking support from Zokesia, who was more than glad to defend it in return for statehood in the Federation.

The Zokesian Federal Government is made up of a Northern Zokesian Parliament and a Southern Arcadian parliament, which are voted in by the people every five years. There are many parties and coalitions are usually required to win a majority, from which a President and Chancellor is decided amongst the victors of each house. The current President is Francisco Grail. The Chamber of Weights and Measures handles economic and judicial matters, and the military is led by Zokesian High Command, at its head the President.

Zokesia's constitution gives power entirely to the federal government. The interior states of Zokesia are locally run at the county level for issues of policing and community but otherwise do not operate autonomously. Sometimes known as "Provinces" these groups have little influence beyond their own sphere, though the Federal government usually takes efforts to keep red tape at a minimum so the provinces can operate as efficiently as possible. The state of Ezekielgrad is run by the Federal Government directly as it contains its capitol.

Each province gets 8 representatives in the Federation Assembly, with Federal States and overseas territory receiving 4. There are a total of 216 members of Parliament, and the President and Chancellor are elected by the majority vote of the new parliament. 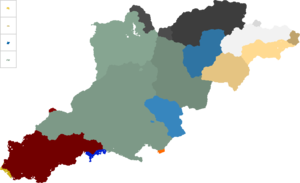 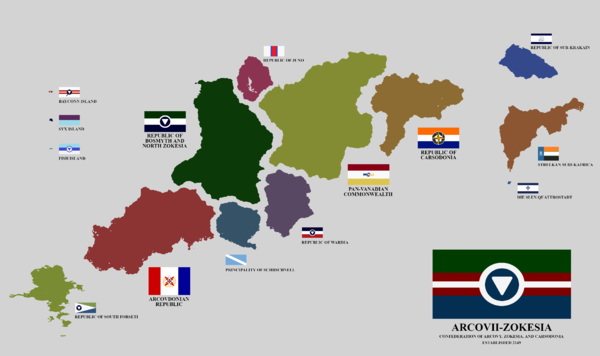 The United States of the Confederacy, 2149.