The political system of the Commonwealth is designed to maximize representation and voting power of its citizens and ensure that freedom and democracy prevail in terms of how the nation is governed. Voting is done via a direct democracy system for many things, with an advanced quantum encryption schema ensuring that tampering is nigh-impossible. For other matters, the Solani government is comprised of an executive branch, the Triumvirate, and a bicameral legislature.

The Triumvirate is a 3-person executive office that serves to represent the 3 respective power blocs within the nation- Mechani, Solaria, and the Colonies. As such, the Mechani PM, Solari First Citizen, and the elected Colonial Administrator form the executives of the Triumvirate.

The two AI countries aligned under the Solani Commonwealth are the Kafrican microstate of Comer and the Kolusian sister state to the MU, the Free State of Swieze. While aligned, both are formally independent of the Commonwealth while remaining closely aligned and intertwined.

The Solani culture is inherently a tripartite mix of Solarian, Mechanikan, and Colonial cultural mores and themes, but several common threads include a high degree of individualism, cooperation being preferred over competition, and belief in the essential freedoms and liberties that ought to be enjoyed by all peoples. In terms of pop culture and development, the Solani populace is extremely well-educated with free public and higher education, and with a mix of domestic and international media, arts, business, and social groups influencing the populace.

The combined military of the Commonwealth has forces dealing with all aspects of potential warfare, across sea, air, land, and space (both orbital and offworld terrestrial combat). The technology for the forces of the Solani military is currently a mix of Solari and Mechani assets but will homogenize over time.

With a massive GDP, economic sphere of influence, and multiple colonies, the Solani national economy is one of the strongest to exist on Kerbin in the planet's history. As time goes on the nation will likely continue to be a world leader in advanced aerospace and civilian tech, as well as military systems development. 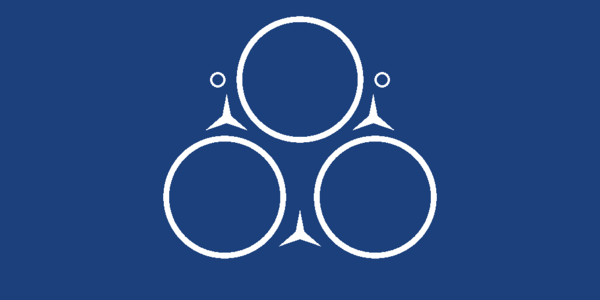 The Solani national flag is based around trilateral symmetry primarily, with the 3 orbs representing Kerbin, Duna, and Laythe (the three main terrestrial environs of the Commonwealth's people), the two small dots representing the colonies of Eeloo and the minor Joolian moons, and the stars representing the 3 major blocs in the nation- the MU, Solaria, and the Colonial populace. The blue represents peace and tranquility as well as life, and the white unity and liberty.
Retrieved from "https://wiki.kerbalpowers.org/index.php?title=Solani&oldid=2586"
Categories: