Difference between revisions of "Fegeland"

KP:Sanitizing
This page has been exported from Fandom and needs restoration before being properly working. Images must be manually imported and links must be corrected.
This page is a draft and is still being written. You can help by completing it.

History of the Empire takes place in 3 main periods, since the beginnings of kerbalkind until nowadays.

During the prekerbinian era (~2000 y. before y. 0), a primitive civilization called Feguanesian Civilization started to expand over the Central Sea. The Feguanesians were an oceanic people from the Crater region. As they started to grow, their mastery of navigation and astronomy reached peaks never reached before on Kerbin. Living of trade, fishing and hunting, the Feguanesians dominated the seas during centuries.

They were present over all the Central Sea and it's coasts, and on the islands of actual Alecton and Sanctum Sovereignty. Some historians claim that they even stretched to the western Imperium's islands.

This people was organized in several tribes called "ari'i vahi" leaded by kings ( ari'i ). Each island or group of island had their own tribe. There were sometimes wars between those tribes, each one pretending to be the most powerful and evolved. The first ari'i vahi was founded around 8000 BC. by Fa'aperehi Tahura 'Oe. Most of the other ari'i vahi were led by Tahura's descendants : the Tahura Dynasty. 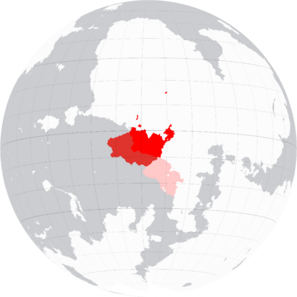 Settlement and birth of Fegeland 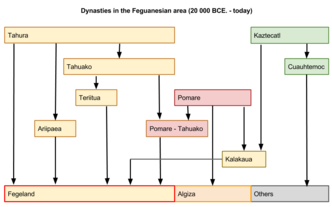 Meanwhile, on the South coast of the Central Sea, at the current location of Fegeland, a people of merchants and farmers had raised. This people lived in the Fegeland's moutains and was called the Kaztecatl. For some reasons that actual historians haven't yet determined, King Tahuako Namrai Nui the 5th, leader of the Southern Alliance, declared war on Kaztecatl. The Feguanesians

defeated the Kaztecatluans at the cost of terrible losses, not being used to land war. The war lasted for 3 years before the two peoples united.

Since those times, a great part of Feguanesian population settled on the Fegeland's coasts and gradually mixed with Kaztecatluans, forming the actual Fegeland population. Nowadays, the Feguanesian culture and traditions still remains alive on the islands and coasts of the south of Central Sea, and have a strong place in Fegeland's popular culture.

The Empire of Fegeland is composed of a main land on the South of Central Sea and some islands scattered in the Central Sea. The coast is rather jagged, consisting of hundreds of beaches, coves, steep cliffs and capes. One region drawns attention : the large penisula on the east of Fegeland. This peninsula, of volcanic origin, is the hottest place of the Empire. There is a warm and humid tropical climate, allowing a lush life to develop. On both sides of this peninsula lies the Northern and Eastern coasts of the Empire. 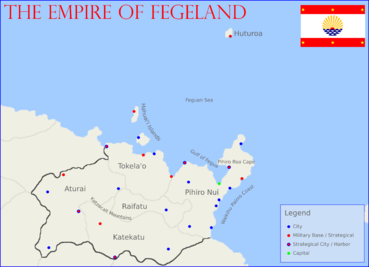 The Northern Coast is the longest but also the most inhospitable. Composed of steep cliffs, rocky capes and gravel coves, she faces the angers of Central Sea. The three biggest ports of the Empire ( Ranga Bay, Tokahe Port and Halemau) are on this coast, which drains most of the Empire's maritime trade.

The Eastern Coast is were you'll feel like at the paradise. Tropical, lush and beautiful life is growing there. Bordered by a warm shallow sea, protected by wonderful coral reefs, this is one of the most beautiful places of Kerbin. There is few industries on this coast. Thanks to a policy of preservation of the coasts, it remains mostly savage and primitive. Some seaside resorts strew along the coast, giving the Eastern Coast it's main resource : tourism. On top of that natural beauty, the coast also hosts the capital of the Empire : Fegua.

By sinking into the lands, we come to the Kaztec Mountains, a young moutain chain (aged of 250M years) formed by recent tectonic movements of the Central Plaque under the Baskian Plaque. These moutains are the homeland of the Kaztecatl people. Neighboring those moutains are the Tapu Mounts, an old kercinian moutain chain aged of more than 745M years. At the south of those two mountain chains are rich and fertile plains, the hub of the Empire's agriculture. These plains produce most of the food resources consumed in the Empire.

The northern half of the Empire is a vast sea dotted with paradisiac islands. Those ultramarine territories are mostly retired and undeveloped, remaining at the same state as they were at the old times of Feguanesian domination of the Central Seas. They are grouped in one single ultramarine district.

At the top north, the island of Huturoa is the biggest and the most prospered island of the district, as it was the old capital of Feguanesia. Since the Empire was founded and the capital moved to Fegua, Huturoa stayed the cultural heart of the Empire, as the cradle of Feguanesian civilization. Today, the recently build Huturoa Space Center drains a lot of jobs to Huturoa. The island also hosts an air force base (Tahura AFB) and an international airport. Rumors report silos of ICBMs in the heights but the Propaganda Service always denied those affirmations. 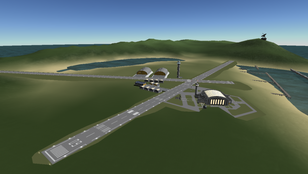 Closest to Fegeland's land, the Hahuhai'i archipelago is composed of two main islands : Tahui (the northern one) and Raivata (the southern one). Tahui is an old volcanic mount surrounded by a wonderful coral reef renowned throughout the Empire. The island is divided into two parts : the northern and largest part, Tahui Nui, concentrates most of the activity, with the biggest air force base of the Empire : Fangatau AFB.

Raivata, on the other hand, is a quite flat atoll renowned for it's coconuts and production of coprah and mono'i oil. Each year, the island welcomes the Hahuai'iki Va'a Nui race, a traditional feguanesian pirogue race starting on Tokahe Port (on the Northern Coast of the mainland) to Raivata. This event is the most important sporting event of the Empire, far ahead the RiverBowl ( 2M viewers vs 800K viewers ).

The Empire's population is distributed very heterogeneously in the territory, mostly on the seaside and living in urban and peri-urban environment. About one third of Fegeland's population lives in moutains or in the south plains. They are mostly descendants of the Kaztecatluans. The rest of the population lives on the coasts or on the islands.

The Emperor of Fegeland, is the highest authority in the Empire. He appoints the Sages and the Governors. He designates his successor (most often his direct heir), who succeeds him in case of death or resignation. There is no way to dismiss the Emperor, exept by war. The Emperor can legislate by decree. 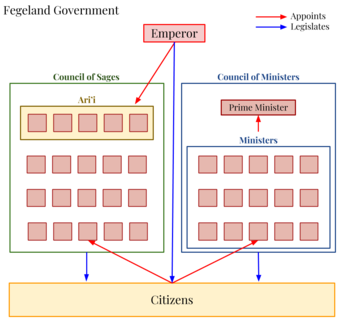 The Government is split in two Councils, with each one having specific functions. Note : the numbers of seats may vary in both Councils.

The Council of Sages

The Council of Sages is the oldest institution of the Empire. It's story starts during the end of the Feguanesian monarchic tribes era, when the south tribes united in an alliance. It is composed of a small number of Sages appointed by the Emperor. The Sages are usually descendants of kings of ancient tribes, and are appointed for life. They can be dismissed by a vote or by the Emperor. There is one Great Sage per District, so there is 6 Great Sages in total. The Great Sages are not dismissible by vote, have a veto right and lead the deliberations of the Council. The Great Sages are descendants of the Ari'i , the old Feguanesian kings. Most of them belongs to one of the ari'i dynasties. The Council of Sages is responsible for debating the legislative proposals of the Council of Ministers at General Assemblies

The Council of Ministers

After the Revolution, the former government escaped to Huturoa, and formed the Temporary Imperial Government for the Empire Recovery (TIGER). Led by Namresh Tahura Kerman (DSOF, FMOH, FSO), who was given the full powers, the TIGER had the same working principles as the legacy government. After Namresh disappeared in a surfing accident at Teahupo'o, the role of Temporary Emperor was given to Hititoa Fa'atuarai, his former Prime Minister. Namresh later came back after having taken part in Wipe Out.

Arc I - A Rising Sunshine